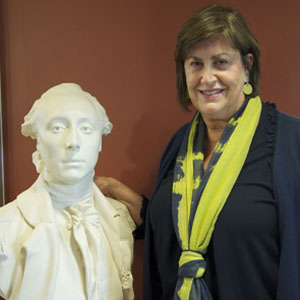 On December 18, 2018 the campus celebrated the career of Diane Shaw, retiring Director of Special Collections & Archives, at a packed reception in Skillman Library. The following are remarks given at the reception by Olga Anna Duhl, Oliver Edwin Williams Professor of Languages.

On behalf of my colleagues and friends, thank you for having invited me to speak on this memorable day in the life of the College. I feel honored, privileged, and most humbled by this special opportunity. When preparing my remarks, I asked myself an obvious question: what makes Skillman Library’s Special Collections and Archives special? The answer was obvious: some 15,000 volumes including the magnificent incunabulum known as the Nuremberg Chronicle of 1493, 350 letters signed by Lafayette, a wealth of prints, books, and memorabilia commemorating the Marquis’s extensive travels, his military and diplomatic activities, including, of course his famous sword, artists’ books, the Christy Girl, modern literature, the Asian collection, the recently revealed LGBTQ oral history interviews, alumni artifacts and papers, in sum, a diverse body of non-circulating documents confined to an invisible space, carefully preserved and protected by invisible hands. In this sense, the Library’s Special Collections and Archives are nothing but an anti-library, a hiding place for rare materials, as the famous semiotician, historian and philosopher Umberto Eco would put it. And yet, this mysterious place named Special Collections has been a living horn of plenty for many of us thanks to the shining presence of the person whom we are celebrating today: Diane Shaw.

Diane: Your profound interest in and contagious enthusiasm for books, dedicated teaching, cutting edge research, innovative outreach initiatives, to name only a few of the areas of your outstanding contributions have left on enduring mark on history of the College.

Diane Windham Shaw has been the Director of Special Collections since 1985 and College Archivist from 1987 to 2017. She holds a Master of Librarianship degree, as well as a B.A. from Emory University, where she also spent the first years of her career as an archivist. Since 1985, and particularly after the rededication of Skillman Library in 2005, she has been in the forefront of the College’s efforts to promote Special Collections as a microcosm of its distinctive liberal arts and engineering programs.

During my 26 years at the College, I have had the privilege to work closely with Diane on several projects, whether teaching-, scholarship- or service-related, be that on French culture and literature, medieval and Renaissance civilization, history of the book, comparative literature, the Lafayette Birthday celebration held every year since 2007, or a major exhibition project devoted to his pioneer activities in the antislavery movement. None of my teaching techniques have generated as much excitement among students as the field trips that we have taken regularly to Skillman Library’s Special Collections. Diane’s extensive knowledge of its holdings, unique literary insight, her incomparable ability to stimulate the imagination through the inspiring stories that she enjoys telling about every object carefully held in her white gloved hands, her mellifluous voice will remain imprinted in our memory forever. The legendary story of Pope Joan, a scholarly woman who disguised herself as a man, who is said to had been elected Pope ruling from 855 to 857, only to be discovered when she gave birth to a son during a procession, and whose portrait had been defaced in several copies of the Nuremberg Chronicle, including Special Collections’ own; Lafayette’s majestic mourning of the “irreparable loss” of his beloved wife, Adrienne, captured in a letter to the prominent French intellectual, Madame de Staël; Honoré Daumier’s famous caricature of Lafayette, The Nightmare showing him weighted down by an enormous pear representing King Louis Philippe; the unknown connection between the Corsican General Pasquale Paoli and Lafayette revealed in a letter that she recently discovered are only a few examples of the unforgettable stories that Diane has enthusiastically shared with us throughout the years.

One of Diane’s most notable contributions has been her curatorial and scholarly work involving the Lafayette College’s extensive collections on the Marquis de Lafayette. For example, she collaborated with Mount Vernon on an exhibition commemorating the friendship between Lafayette and George Washington. The exhibition, which included many items drawn from Lafayette College’s Special Collections, was on view at Mount Vernon, Lafayette College, and the New-York Historical Society between 2006 and 2008. Many of us are also familiar with Diane’s lead essay on this filial friendship included in the published catalog, A Son and His Adoptive Father: The Marquis de Lafayette and George Washington (Mount Vernon, 2006).

Diane has been profoundly inspired by Lafayette and his involvement in human rights, including his antislavery activities. In 2001, she mounted an exhibition, “Lafayette and Slavery” at Skillman Library. In 2009, she made presentations on Lafayette and his anti-slavery activities at Boston’s Lafayette Day commemoration and at Trenton’s celebration of its 225th anniversary as the Nation’s capital. In 2013, she served as editor for a collection of essays published by the American Friends of Lafayette, which included her article on Lafayette’s antislavery role. Her recent essay, entitled: “‘Two Youths (Slaves) of Great Promise’: The Education of David and Washington McDonogh at Lafayette College, 1838-1844,” included in the volume Slavery and the University: Histories and Legacies, edited by Leslie Harris and James Campbell (University of Georgia Press, 2019), tells the remarkable story of two enslaved youths who were sent to Lafayette College to be educated, soon after the College opened. This is the first edited collection of scholarly essays devoted solely to the histories and legacies of this subject on North American campuses and in their Atlantic contexts. As we have recently learned, Diane has documented the exceptional story of Lafayette’s first African American graduate and America’s first black eye doctor trained at Columbia in 1847, who was awarded a posthumous medical degree by this institution only in 2018. In a recent talk on “The Lafayette-Liberia Connections, 1836-1869,” presented in conjunction with the campus visit of former Liberian president Ellen Johnson Sirleaf, Diane gave valuable insight into Lafayette’s role in educating black students in the 1830s and 1840s.

Beginning in 2014, Diane and I embarked on a fascinating journey devoted to Lafayette and his contributions to the antislavery movement of the late 18th and early 19th century. This remarkable collaboration culminated with a public exhibition that we co-curated in 2016-2017 at the Grolier Club, New York City, a vibrant center for bibliophiles from around the world. We also co-edited a catalog in conjunction with the exhibition, which includes essays by prominent American and French Lafayette scholars. Throughout our weekly meetings that brought us together for more than a year, the long and meticulous process of selection and organization of nearly one hundred exhibition items, the abundant correspondence with the essayists, the numerous trips to New York City, the writing of seventy-five-word labels, posters, gallery guides, and other promotion material, the symposium, gallery talks, and lectures that we presented to professional groups and the general public, Diane stood as an eminent example of boundless generosity, grace, understanding, and incomparable patience.

Through her work on Lafayette, whose name has become the epitome of the Franco-American friendship, Diane has also contributed to the vibrant cultural exchange between France and the United States. “Lafayette We Are Here” is the web version of an exhibition that she spearheaded, which was on display at Skillman Library, between August and December 2007, in honor of the anniversary of the 250th birthday of the Marquis de Lafayette. In 2015, Diane was actively involved in the events surrounding the transatlantic voyage of the Hermione, the contemporary replica of Lafayette’s warship that brought the news to Gorge Washington about France’s offering support to his troops. Thanks to Diane, the Lafayette collection has been playing an increasingly prominent role in contemporary scholarship as well, as illustrated most recently by Philippe Schneider in his dissertation defended at the Parisian Ecole des chartes, which examines Lafayette’s popularity in the Unites States and France from 1824 to 1834.

Numerous awards bring testimony to Diane’s outstanding career. At Lafayette, she has received the Administrator of the Year award, as well as the Marquis Distinguished Teaching Award. In 2012, Diane was named Chevalier in the Order of Arts and Letters by the French Ministry of Culture and Communication for her work with the College’s Marquis de Lafayette collections.

Not only is Diane a friend of Lafayette and his American friends, of rare books, of libraries and their friends. Through her continuing commitment to the preservation, (re)creation, and dissemination of knowledge and admirable effort to create a community of learners on campus and beyond, Diane has been “a true friend of the cause”, to quote British abolitionist Thomas Clarkson’s declaration made about Lafayette in 1842.

Dear Diane, may today’s celebration be the beginning of an exciting new journey in the company of your beloved Bart and William. We wish you a bright and happy retirement, and look forward to seeing you on campus for many years to come.