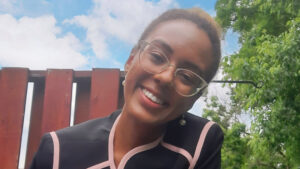 How and when did you select your advisor and the thesis committee members?
Professor Cho (Gov&Law) and Professor Stewart-Gambino (IA). I selected my advisors at the end of my junior spring semester after having taken multiple classes with both professors. I approached them to ask if they had any interest in my area of research and they both agreed which was fantastic. I also reached out to Professor Park, who is my third reader and completes my committee, because she has a lot of knowledge and expertise in this area.

When did you start thinking about your thesis? How did you select your topic? How did you develop your research question?
I started thinking about my topic during my government and law seminar on Global Governance with Professor Cho during my junior spring semester. The question of Chinese treatment towards ethnic minorities had come up in several class discussions and I had some contextual knowledge from an internship several years prior so I figured that this was something I was curious to learn more about but this was also a topic that I already had some foundational knowledge on which I found to be useful for methodological purposes.

I ended up changing my question several times, including after my December proposal defense session. Initially, I wanted to explore the role that legal philosophies played in the generation of ethnic minority policy outcomes but the scope there was too broad. Instead, I settled on a more tangible and, therefore, considerably more feasible question.

How did you start tackling your thesis project at the very beginning?
At the very beginning, most of my work ended up being conceptual and discussion-based. I would meet weekly with my advisors and explain to them what I was thinking, where I thought the question could go, what some potential case studies and methodological set ups could be for testing various hypotheses, and how I planned to ultimately answer the question. As a collective, we would brainstorm and test out new methodological outlines and case study models to find the most rigorous method for testing my hypotheses. We retraced our steps several times, oftentimes settling on one course of action and then going back, revising it, and finding a better way forward. While this can feel frustrating at first, it is better to establish solid foundations upfront, no matter how long it takes, because you’ll need them as the project develops.

Did your advisor explain the structure of a thesis project to you?
Yes, this was the first conversation we had. As a joint honor thesis student, my project has to meet the criteria proposed by both academic departments and that can take some adjustment to get right. We discussed the timeline for the project, the academic credits involved and the registration process for each credit, which department credit would be completed first and which would come second, the proposal defense expectations for both departments, and the final defense expectations for both departments. While this can sound overwhelming, I found that the department expectations complemented each other really well and ultimately, the dual criteria really accelerated my progress timeline.

Did you have to do a literature review? Had you ever done one before?
Yes, I have a literature review in my first chapter. As a writing associate, I have both written and reviewed several literature reviews so this was not an unfamiliar hurdle. Unlike in classes, where the majority of the material you read is curated by the Professor, it was really exciting to be able to source my own literature and organize it the way I wanted. At first, it felt like a huge responsibility – being trusted to make yourself an expert on a topic – but it was one of my favorite parts of the whole process.

Do you remember receiving correspondence from the library about your honors thesis?
No, I do not.

What did you find most challenging about your thesis project?
The hardest part for me was narrowing down my question and methodology. At first, I planned on doing a comparative case study analysis that examined legal philosophies from China, Japan, and the UK. Instead, I finished with a comparative analysis of Xi Jinping and Hu Jintao’s respective policy approaches towards the Tibet Autonomous Region and the Xinjiang Autonomous Region, with the latter approach proving to be far more manageable and, in my opinion, valuable to the scholarly community. Despite narrowing my scope from an international focus to a domestic scale, I was still able to find an abundance of important questions and relevant data. If anything, by narrowing my focus now, I have a much broader landscape for future exploration.

What did you find most rewarding about your thesis project?
I didn’t realize how rewarding this project was until I finished writing my final chapter. Changing my question in the second semester had been pretty disheartening and I questioned several times whether I still had passion for the project and this new approach. My primary hypothesis examines the threat perception hypothesis which is essentially the argument that Chinese ethnic minority policy outcomes are not the product of purely domestic, international, or ideological conditions, but instead reflect a leader’s individual perceptions of these influential landscapes. This idea was originally proposed by a scholar named Sheena Greitens. In Greitens’ research, she examines the threat perception hypothesis as it applied to Xi Jinping’s treatment of Uighur Muslims. My research takes this theory and applies it across a multiple of different contexts, including Xi Jinping’s treatment of Tibetan Buddhists and Hu Jintao’s treatment of Uighur Muslims. In doing so, I was able to take a foundational theory and help establish its validity within scholarly discourse in a way that has not yet been done before and that is rewarding.

What assistance did your advisor/department offer you throughout the course of the year?
My advisors were fantastic in that they both made themselves available for questions and feedback, even during the interim and holiday months. They offered substantive input, time-management guidance, inspiration, and motivation when it was lacking. They validated my experiences throughout this process and made clear that they were there to help me produce the best work possible.

Did you meet with librarians in the course of conducting your research? How many times and at what stages of your research?
Yes, yes, yes. I met with Terese really early on to begin collecting data sources for my various case studies. I then met with both Ben and Lijuan during my second semester after changing my research question. The Chinese government is not forthcoming when it comes to judicial data, especially self-incriminating judicial data, so I felt like I was in a race against time to get the data I needed. Fortunately, the library was a massive help and generously arranged database access for me. I could not have completed this project without their immense help and support.

What other kind of support did you rely on throughout the year to accomplish your thesis (parents, friends, etc.)?
Friends and peers were a massive source of support. The International Affairs department kindly organized a bi-weekly thesis cohort check in where we could exchange ideas, discuss timelines, and seek feedback from one another. During exam periods and deadline phases, I found this support to be particularly important.

Were you able to get access to all of the research materials you wanted for your project?
Yes, thanks to the library. I ended up needing access to a very niche database that houses primary court documents dating back to the 1900s. As the only provider of this information, this database made access difficult and costly. The library worked closely with me to access these materials and the project would not have been possible without their help.

Would you do anything differently if you went through the process again?
Honestly, no. This is not to suggest that I didn’t feel that way at various points throughout the process, however, looking back at the year-and-a-half long journey, I think every step was valuable. While I read a ton of sources that did not end up being relevant to my final project, they still sparked curiosity in other areas that I look forward to pursuing at other points in the future. I learnt a lot about my work style through this process. As I transition into law school, these are takeaways that I will use to guide my approaches towards future projects.

What advice would you offer other honors thesis students, especially in your department?
I have two pieces of advice. The first is to choose something that you care about and design a thesis that you can use to help shape your future. As a law school applicant, I found myself interviewing with graduates who had worked in the legal field for years. When asked about what we were doing, they would talk about their government agency work and paralegal endeavors. Knowing that as an undergraduate I would not have the same scope of work opportunities, I chose to talk about my thesis, the legal components behind the question, and the research skills I developed as a result of its completion. As such, I was able to use my thesis as a tool for building my applicant narrative.

Second, you have to believe that you can do it. As captain of the speech team, I spent the majority of the month of April traveling to different states and competing for weeks at a time. People, rightfully, had questions about my timeline and whether a project of this scale was feasible given my time constraints. You have to believe that you can and will do it, no matter your circumstance. If you want to get it done, there is nothing in your way.