Phillis Wheatley was the first published African American poet. Her poems were reprinted in London and America in the late eighteenth into the early nineteenth centuries, and were later celebrated by abolitionists such as Abigail Mott and Frederick Douglass. Her writings have been understood to be fundamental to African-American literature. Now, two of the earliest works which circulated under Wheatley’s name, are part of the holdings of Special Collections at Skillman Library. 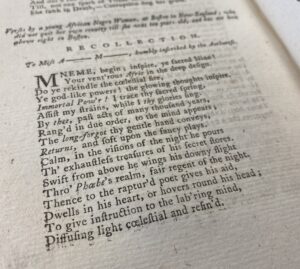 Born in Senegal, Phillis was brought to America as a slave, and sold at a young age to the Boston merchant John Wheatley. Named for the boat that transported her to America, the young African woman was educated by John’s wife Susanna in a manner similar to the family’s two children immersed in astronomy, the Bible, British literature, Greek and Latin classics, and geography. Early poems on subjects such as the Stamp Tax and the death of George Whitefield caused controversy in New England over contested authorship, and ultimately led the Wheatley’s to turn to British society for further support.

Wheatley’s collected works, Poems on Various Subjects, Religious and Moral, was published in London in 1773. However, Wheatley’s poem, ‘Recollection,’ first appeared in The Annual Register, or A View of the History, Politics, and Literature for the Year 1772. This poem was revised and later included in the collected works under the title ‘On Recollection.’ The same poem also appeared in 1773 The Gentleman’s Magazine and Historical Chronicle. This particular magazine also featured an article in defense of Wheatley’s education and poetic skills lending favor to the notion that her life and poetry were of particular interest to London society. These two early appearances of Wheatley’s work, both held in Special Collections, offer an opportunity to consider how her poetry was received, edited, and reworked in this pivotal phase of the poet’s transatlantic literary celebrity.